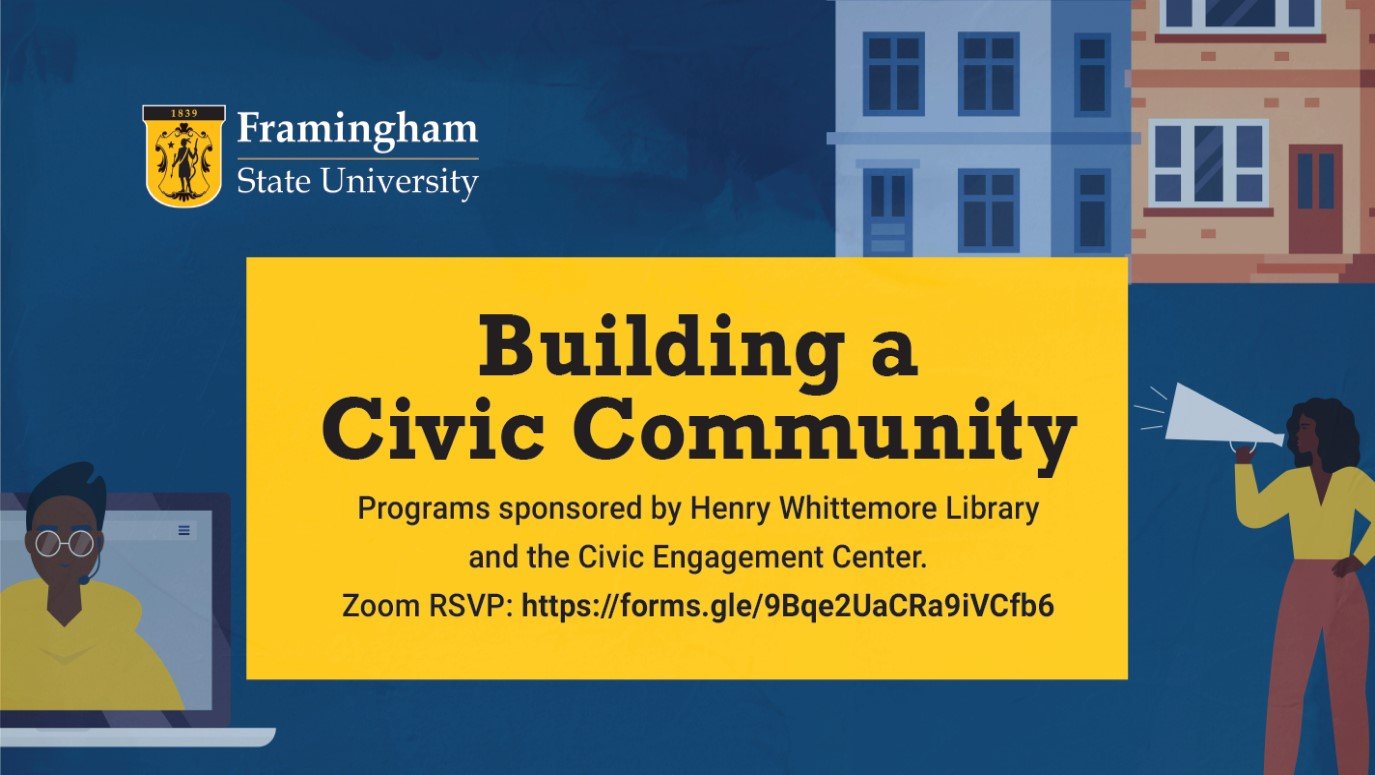 Dr. John Ambacher, Professor Emeritus of Framingham State University, will present on the current state of democracy. Dr. Ambacher argues that America was in crisis well before the presidential election of 2016. The crisis centered on the state of our democracy itself. A representative democracy should guarantee that every citizen has equal worth. That can only be accomplished if every citizen is guaranteed an equal freedom to vote. This is no longer the case. Dr. Ambacher will explore how we arrived at this state of affairs and what we can do to restore a representative democracy.

Federal funds provided by the Institute of Museum and Library Services and administered by the Mass. Board of Library Commissioners supported these programs, which are sponsored by the Henry Whittemore Library and the Civic Engagement Center.

In this webinar artist Amy Khoshbin will discuss her creative practice and social engagement.

Amy Khoshbin is an Iranian-American Brooklyn-based artist, activist, and educator. Her practice, as an artist and pedagogue, builds bridges between disparate communities to counteract fear with a collective sense of empowered radical acceptance. She pushes the formal and conceptual boundaries of art-making to foster progressive social change through performance, social practice, video, rap music, installation, tattooing, teaching and writing.

Can you spot fake news?

Last fall, a mere 26% of adults in the U.S. were “very confident” in their ability to distinguish fake news from credible information - down 13% in three years, according to Statista.

With a major election on the horizon and the internet serving as a goldmine for misinformation, Laura Saunders, a professor from Simmons University, was joined by Emily Sweeney, author and journalist for The Boston Globe, to discuss effective strategies for evaluating news sources during a webinar on Oct. 19.

“Access to information is only the first step,” Saunders said. “If we can’t make sense of that information, if we can’t understand it, if we don’t know whether it’s trustworthy and authoritative - then it’s not really doing us any good.”

Saunders explained how our rights as U.S. citizens - such as free speech, the right to assemble, and the right to vote - all play a role in the spread of fake news.

“In order to really exercise our rights, we should be thinking about exercising them in ethical and informed ways,” Saunders said. She emphasized the importance of evaluating and using information in ways that will enable full participation in our democracy.

To do this, Saunders said consumers can’t allow confirmation bias or emotions to sway their thought process.

Not relying on initial reactions or forming early judgements based on emotion is essential to seeing the truth - and preventing the “continued influence effect.”

Saunders described the continued influence effect as a mistaken belief we spread to others because it’s difficult to unlearn. “We have to recognize that not all information is created equal - and then we have to think about who we can trust,” she said.

Saunders pointed to the book “Web Literacy for Student Fact-Checkers” by Michael Caulfield, and highlighted his “four moves and a habit” framework - which consists of fact checking information, finding the source where the information originated, looking for other stories on the same topic, and then applying what’s been learned to conduct a better-informed search.

From a journalistic stand point, Sweeney said she’s constantly fact checking information. “One of the things that makes The Globe different [from other outlets,] is we do fact check everything that goes into the paper,” she said.

Sweeney also added that it’s good to be skeptical and aware when consuming information.

To enforce a “healthy news diet,” Saunders provided a list of trustworthy and useful sources - such as the Associated Press, BBC News, PolitiFact, and Snopes.

The discussion ended with both Saunders and Sweeney urging the audience to support their local newspaper.

“Quality information doesn’t always rise to the top, so it’s frustrating to say the least,” Sweeney said. “Support your local newspaper when you can.”

The virtual event was sponsored by the Henry Whittemore Library and made possible by a $7,500 Civic Engagement Grant FSU received last month - aimed to increase student engagement in issues of public concern.

With the intent of becoming a civic engagement hub, FSU is hosting similar lectures and panel discussions regarding political issues, the state of America’s democracy, and racial healing training. These activities are being held throughout this month, in order to coincide with the presidential election in November.

For over 40 years, Joseph Bruchac has been creating literature and music that reflect his indigenous heritage and traditions. He is a proud Nulhegan Abenaki citizen and respected elder among his people. He is the author of more than 120 books for children and adults. His best selling, Keepers of the Earth: Native American Stories and Environmental Activities for Children series, with its remarkable integration of science and folklore, continue to receive critical acclaim and to be used in classrooms throughout the country. His honors include a Rockefeller Humanities fellowship, a National Endowment for the Arts Writing Fellowship for Poetry, the Cherokee Nation Prose Award, the Knickerbocker Award, the Hope S. Dean Award for Notable Achievement in Children's Literature and both the 1998 Writer of the Year Award and the 1998 Storyteller of the Year Award from the Wordcraft Circle of Native Writers and Storytellers. In 1999, he received the Lifetime Achievement Award from the Native Writers Circle of the Americas.

Melissa Sweet has illustrated over 100 books as well as many toys, puzzles, and games for eeBoo. Her work has been in magazines, on greeting cards and as drawings on her living room walls. She has received numerous awards including two Caldecott honors: A RIVER OF WORDS: THE STORY OF WILLIAM CARLOS WILLIAMS and for THE RIGHT WORD: ROGET AND HIS THESAURUS, both by Jen Bryant.

Melissa has written four books: CARMINE: A LITTLE MORE RED, a New York Times Best Illustrated book; TUPELO RIDES THE RAILS; BALLOONS OVER BROADWAY: THE TRUE STORY OF THE PUPPETEER OF MACY’S PARADE, a Sibert Award winner for informational books, an NCTE Orbis Pictus winner for outstanding nonfiction, and the Cook Prize for STEM picture book. Her most recent book, SOME WRITER! THE STORY OF E. B. WHITE was a New York Times Best Seller and garnered an NCTE Orbis Pictus award and a Boston Globe–Horn Book honor for nonfiction.

Looming In the Shadows of Łódź

Presented by Professor Leslie Starobin, “Looming in the Shadows of Łódź” weaves together film clips, photographs, and oral history narratives to reveal how memories and stories of the Shoah affect multiple generations of one family. Notably, the cinematographer, Ori Segev, is the grandson of Holocaust survivors. This event will be moderated by Professor of History, Lori Gemeiner Bihler.

Just Mercy (2019) is an unforgettable story about Bryan Stevenson, a young African American lawyer challenging the Alabama legal system over its wrongful conviction of an innocent man sentenced to death. Based on a true story with phenomenal performances by Jamie Foxx and Michael B. Jordan, this is a must-see.

October 29th Webinar Session - 4:30 p.m. Pride Alliance and the Center for Inclusive Excellence with Dr. Bridgette Sheridan. Sign-up with your Framingham email address; you will receive a zoom link 30 mins prior to the start of the event: https://docs.google.com/forms/d/1JrSomS2nSAX0R_O2pawhXdPoY_iZBtA558fzXtGim74/viewform?edit_requested=true

Partner with Framingham State University Police in the fight agaisnt Breast Cancer! The Pink Patch Project raises awareness and funding during the month of October, which is Breast Cancer Awareness Month.

We have the simple goal of increasing awareness about the life-saving benefits of early detection and early intervention in the fight against breast cancer. In addition to our public education efforts, we have the added goal of raising funds from the sale of Pink Patch Project patches and other items to go directly to fund the research, treatment and education needed to help find a cure.

The program centers on vibrant pink versions of the public safety employee's uniform patch. These bright pink patches have been specially designed by each participating agency specifically for their Pink Patch Project participation. Public safety employees at each of the participating agencies wear their pink patches on their regular duty uniforms each year for the entire month of October during “Breast Cancer Awareness Month.”

The pink patches are intended to stimulate conversation with the community and to encourage public awareness about the importance of early detection and the on-going fight against this disease.

Virtual Employer Showcase Series, every Wednesday, on Zoom, 12:30-2:30pm, through 11/18/20.
The CSER Office traditional Wednesday Employer Showcase is currently a “virtual networking” platform, for hosting our Showcases on Zoom, through the end of the fall 2020 semester. As we are socially distancing and staying home, networking has never been more important. The Virtual Showcase gives students an opportunity to informally network with local employers who are hiring for full-time and/or internship opportunities, and also provides insight into the spotlighted company, offering advice on the trends in their market and industry.

Major/Minor Fair, Tuesday, 10/27, on Ramlink from 11:30am – 1:00pm
On Ramlink: https://ramlink.framingham.edu/event/6518901
Undergraduate students are invited to explore the many majors and minors FSU offers. The Major Minor Fair provides all undecided, re-deciding, and exploring students the opportunity to speak with faculty and student representatives from all academic programs and campus resources and learn about specific requirements for majors, minors and career options.