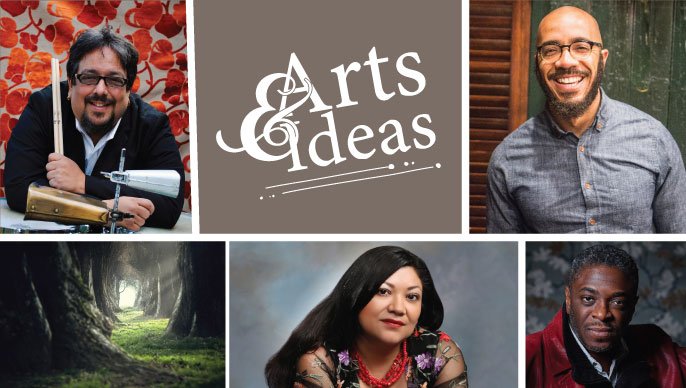 Framingham State University is proud to present Arts & Ideas 2019-2020: a year of must-see speakers, performances, exhibitions and films, and more.

The feature series for this year's program explores the theme of ROOTS/ROUTES, and looks at issues as diverse as the roots of fascism to the scientific literacy around climate change and our route forward.

The series kicks off in September with an exciting visit from Regie Gibson:

Do. Not. Miss. It. Regie Gibson is a former National Poetry Slam Individual Champion, and Chicago Tribune Artist of the Year. Regularly featured on NPR, he has appeared on HBO’s Def Poetry Jam. With a fresh, irreverent, and powerful message, he will now bring his poetic voice to FSU!

Other Arts & Ideas sponsored events in September include:

Grammy Award-winning timbalero, Eguie Castrillo and his 11-piece salsa band, return to Framingham State as part of Homecoming & Family Weekend! This promises to be another electrifying outdoor performance from a band that has entertained audiences across the globe. Don’t miss your chance to listen to this world-renowned percussionist live!

Inspired by playing and singing one another's songs at their own "porch parties," these established Boston area musicians and singer/songwriters decided to combine their individual talents and create their own brand of Urban Folk, Country, and Blues. All are seasoned players, each with her own pervasive individual music persona and critical accolades. Among them, they have shared the stage with a distinguished litany of artists, including Willie Nelson, the Indigo Girls, and Lyle Lovett. Refreshments included!

Dr. Margaret Weitekamp from the Smithsonian's National Air and Space Museum invites us to explore the impact of Lt. Uhura on American culture and society. Introduced in Gene Roddenberry's original television program in 1966, Lt. Uhura is arguably the most historically significant character of the Star Trek franchise. As a woman of color depicted in popular culture, in a period of tremendous change for African Americans and women in the United States, she both evoked and played against the contemporary historical context.

To see the full list of series and events for the upcoming academic year, visit the Arts & Ideas web pages at https://www.framingham.edu/the-fsu-difference/arts-and-ideas/.

Three new exhibitions were unveiled at Framingham State University’s Danforth Art Museum in recent weeks, featuring the work of two contemporary photographers, highlights from the permanent collection, and a mixed-media exhibition focused on the intricacies of covering the body and the meaning held in garments.

The museum opened Populuxe on July 30th, featuring the work of contemporary photographers Sean Sullivan and Steven Duede, who explore the color, design, and popular luxury of the car and home in the postwar era.

Highlights from the Permanent Collection have also been in display since July 30th, featuring works from the early nineteenth century to today in all media with a focus on some of the favorites in the collection, including Charles Sprague Pearce’s A Village Funeral in Brittany.

9/11 Anniversary Event - Free Screening of You Are Here

Join us on September 11th for a free screening of You Are Here -  A Come from Away Story.

To register for your free tickets, visit https://bit.ly/2Onn8dY

You Are Here - A Come From Away Story is an intimate feature documentary that goes deep into the community of Gander, Newfoundland where 38 airliners carrying over 6,500 passengers were forced to land after the terrorist attacks on 9/11. The film pulls back the emotional layers surrounding the five days during which the community housed, fed and cared for the dislocated passengers (or the "come from aways" in Newfoundland parlance).

While their stories were the inspiration for the extraordinary Broadway hit musical, Come From
Away, the documentary, You Are Here, reveals first-hand accounts of the great kindnesses and energetic resourcefulness the community showed their unexpected guests. Their emotional and sometimes humorous story of compassion and generosity, born of a long history of rescuing and welcoming shipwrecked sailors, resonates with a legacy of healing and reconciliation for the world - especially for the survivors of those murdered on 9/11, and for the first-responders who lost their own lives saving others on that fateful day

The following was submitted by Dr. Sunny Tam, Coordinator of the University's Professional Science Masters Program in Biotechnology.

Major factors driving growth of the drug discovery and regenerative medicine markets are increasing public and private investments for R&D, expanded use of organ transplantation procedures, and rising incidence of chronic diseases. Tissue engineering has advanced rapidly during the recent years. New types of bio-matrixes and genetically modified cell types plus advanced 3-D printing technology have together transformed this field.

The PSM program in Biotechnology at FSU was able to collaborate with a local Hopkinton biotech equipment company in the training of a PSM graduate student for this new branch of technology. A highly efficient and adoptable commercial 3-D cellular printing platform was loaned to the university for the training of a student in his independent study, during this summer. The student has learned coding, protocol development and hardware maintenance of this advanced instrument. This will pave the way for the student to gain new employment opportunity and utilization of knowledge learned through the Master degree education at FSU.

-Professor Joseph Adelman from the History Department did an interview with the New Books in History podcast that went live in August on his book, Revolutionary Networks: The Business and Politics of Printing, the News, 1763-1789. Here’s the link: https://newbooksnetwork.com/joseph-m-adelman-revolutionary-networks-the-business-and-politics-of-printing-the-news-1763-1789-johns-hopkins-up-2019/

-Dr. Bartholomew Brinkman’s essay, "Women’s Poetry in the Modern British Magazines: A Case for Medium Reading," has just been published in Women, Periodicals and Print Culture in Britain, 1890s-1920s: The Modernist Period (The Edinburgh History of Women's Periodical Culture in Britain Series). Here is a link to the publisher’s announcement of this important volume of essays, edited by Faith Binckes and Carey Snyder:
https://edinburghuniversitypress.com/book-women-periodicals-and-print-culture-in-britain-1890s-1920s.html

Dr. Brinkman also recently delivered a talk, "Big-Shouldered Magazines: Chicago Modernism in Poetry and The Little Review," at the annual American Literature Association meeting held in Boston in May. He also delivered a paper, "Yellowstone Scrapbooks and the Mediation of American Cultural Identity," at the Society for the History of Authorship, Reading, and Publishing (SHARP) conference held in Amherst in July.

-Professor Patricia Horvath's essay, "Diligence," has just been published in the current issue of F(r)iction, the literary journal of the Brink Literacy Project. "Diligence" is from a series of linked essays on the seven deadly sins/seven cardinal virtues as they relate to issues of cancer and caretaking.

-Dr. Kristen Abbott Bennett contributed a peer-reviewed blog post to Northeastern University’s Women Writer’s Project, “The Preposterous Publication History of Elizabeth I’s ‘Golden Speech,’” May 21, 2019. Her invited book review of Tara Williams’ Middle English Marvels: Magic, Spectacle, and Morality was published in the Summer 2019 issue of Renaissance Quarterly, Cambridge UP.
She and her Stonehill College student intern published a TEI-encoded, diplomatic edition of Henry Petowe’s 1598 addition to Christopher Marlowe’s “Hero and Leander” on The Kit Marlowe Project. She also published a recent Project Update about the Kit Marlowe Project's next steps. Dr. Bennett is eager to find a student worker this fall to help her redesign the site for accessibility.

-English Professor Emerita Dr. Miriam Levine’s poem, “On the Steps of the Miami Beach Cinematheque,” has just been published in the online journal Vox Populi. Here is a link to her poem: https://voxpopulisphere.com/2019/07/20/miriam-levine-on-the-steps-of-the-miami-beach-cinematheque/

Every spring, the English Department honors an emerging writer with the Miriam Levine Reader Award, established to recognize Dr. Levine’s contributions to the department during her years as Chair, her pivotal role helping to build the Creative Writing program, and her remarkable career as a poet. She is the author of five poetry collections.

-Dr. Rachel Trousdale’s poem, “The Reef,” has just been published in The Yale Review. Here is a link to her poem: https://yalereview.yale.edu/reef

-Professor Eamon Cunningham’s article, “The Sound of Silence: The Role of Silence in the Teaching of Writing,” will be published in Issue 124 (September 2019) of English Teaching Professional (Pavilion Publishing Group), an international publication on the teaching of English based in the UK. Professor Cunningham, a Visiting Lecturer in the English Department, is Chair of the English Department at Milford High School.