Media Coverage of our Opening Celebration: 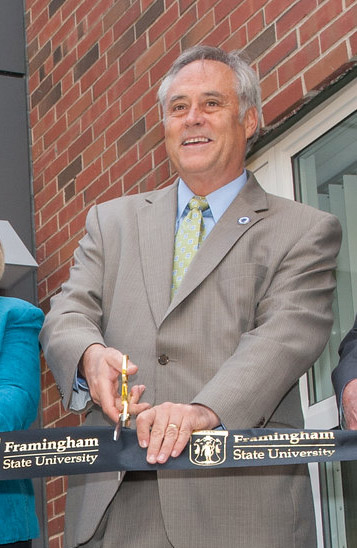 Chris Walsh, the son of a Navy admiral, spent his youth moving around the country. An architect by training, he moved to Framingham in 1989 and found a home where he and his wife, Cindy, would raise their children. Chris served the local community in countless ways over the years, as an elected town meeting member, a library trustee, a board member of Amazing Things Arts, and president of the Framingham Historical Society. Most recently, Chris was the elected representative of the 6th Middlesex District in the Massachusetts House of Representatives, which included much of Framingham, from 2011 until his death in 2018. Chris showed a passion for supporting equity and access to high-quality education for all. He was involved with Framingham State University in  many ways, supporting the preservation of the 1812 House in which the MetroWest College Planning Center is located, as well as the university’s merger with the Danforth Art Museum. Chris was presented with the Citizen Laureate Award at the university’s 2016 commencement ceremony.

In fall 2015, a group of local parent advocates met with Representative Chris Walsh to share their concerns about the challenges of navigating the special education process. Rep. Walsh convened a group of parents and professionals to begin developing a vision for a new center that would address these unmet needs in the community. Rep. Walsh brought the initiative to Framingham State University, where it was welcomed by the Provost, Dr. Linda Vaden-Goad, and a committee was formed to begin establishing a proposal for the center. The planning committee included FSU faculty, staff, and administrators, as well as parent advocates and representatives from nonprofit organizations. This group worked for several years to conduct a needs assessment of local educators and parents/guardians, develop the center’s mission statement, reach out to local school districts to explore partnerships, and seek funding for the center. After the death of Chris Walsh in spring 2018, the committee decided to name the proposed center in his memory. The university approved the official formation of the Chris Walsh Center for Educators and Families of MetroWest in spring 2019. During the fall 2019 semester, the committee has been hard at work preparing for a January 2020 launch of the center’s programming.