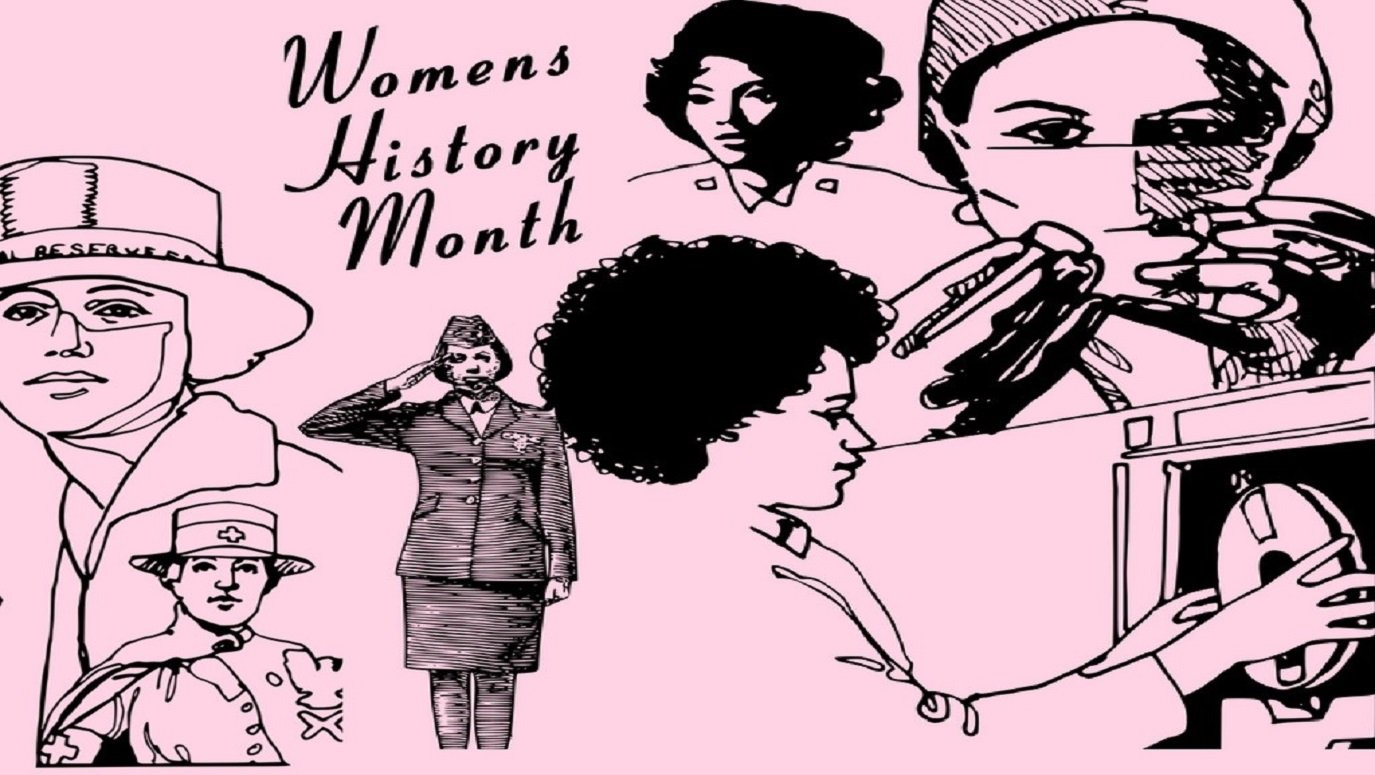 Please join us in celebrating Women's History Month in March!

M.I.S.S. Meeting: Branding and Professional Etiquette, Monday, 3/6, at 7 p.m. in the Center for Inclusive Excellence (library)
With the Women of Delta Sigma Theta Sorority Inc. Delta Sigma Theta is a not-for-profit Greek-lettered sorority of college-educated women dedicated to public service with an emphasis on programs that target the African American community.

CIE COMMUNITY CONVERSATION #SayHerName, Wednesday, 3/22, 4:30 p.m. in the Center for Inclusive Excellence (library)
Join us for a discussion about police brutality and anti-black violence against black women in the United States. We will commemorate the women who passed over the past two decades.

Women Making History Now Award Reception
In honor of Women’s History Month, Framingham State University will recognize women in leadership who have made a significant contribution to their professions and our communities. The honorees are women who have advanced the cause of achievement and serve as role models for people throughout and beyond the state of Massachusetts. More information to follow.

All members of the FSU community are welcome to attend events. For questions, please contact Chon’tel Washington at cwashington@framingham.edu.

Join Galen Razzaq a renowned flutist that has performed with recording artists such as Billy Taylor, Gwen Guthrie, Melba Moore, and Sun Ra. He will take you on a calm and relaxing musical journey. He has performed throughout the United States and around the world. You will not be disappointed by the end of his breathtaking performance.

On Tuesday, March 7 at 7 p.m., the Framingham State University Chorus will be joined by Franco-American folk singer Josée Vachon-Cevallos in a concert of music from Quebec and France. The program will feature Vachon-Cevallos in solo songs and in arrangements made for the FSU Chorus by its director, Dr. Paul Cienniwa.

Born in Québec and raised in Maine, Vachon-Cevallos has been sharing her Franco-American upbringing for over 25 years through traditional and contemporary folksongs from Québec and Acadia and through her own compositions. Most recently she was the featured artist for the 2016 Christmas Revels.

The FSU Chorus includes students and alumni from the university and area community members. The concert is free and open to the public and will take place in the Heineman Cultural Center.

The Centers for Early Childhood Education invite you to the 10th Annual “Amazing Artists” Children’s Art Show and Fundraiser this Thursday, March 9, in the McCarthy Center Forum.  Art created by the children attending the Child Development Lab and Early Childhood Center will be on display from 11:30 a.m. to 1:00 p.m. and in the evening during the gala reception from 5:30 p.m. to 7:30 p.m.

Please visit the art show and fundraiser during your lunch hour.  Raffle baskets and silent auction items will be available from 11:30 a.m. to 1:00 p.m. and from 5:30 p.m. to 7:30 p.m. Raffle and silent auction items will include meals from local restaurants, tickets to Amazing Things Art Center, mini-golf passes, and themed baskets for chocolate lovers, cooks and bakers, and children’s art fun. Tickets are $1 each, 6 tickets for $5, or 26 tickets for $20. All proceeds benefit the children’s programs.

The World in Flicks: Mountains May Depart

Mountains May Depart (2015, China) - In Mandarin Chinese with English Subtitles

At once an intimate drama and a decades-spanning epic that leaps from the recent past to the present to the speculative near-future, This film is an intensely moving study of how China's economic boom and the culture of materialism it has spawned has affected the bonds of family, tradition, and love.

Presentation by the Muslin Justice League

This presentation with the Muslim Justice League will focus on sharing policy expertise on the “domestic war on terror” and different violations of human and civil rights.  The MJL will also discuss resistance strategies, which have been developed with the help of social services providers, attorneys and law students; and faith, community and student groups.  The first goal of these discussions is to learn about the struggle against racial, religious and political profiling. The second goal is to allow a space on our campus for those interested, to learn about strategies on how to be an active bystander.

Students should to take the opportunities presented to them to explore new cultures by studying abroad, according to a panel of four FSU alumni, who spoke about their personal experiences on Feb. 27.

Olivia D’Alessandro traveled to Thailand to teach English. She said it is hard for education majors to study abroad while pursuing their Bachelor’s degree, but teaching after graduation in a foreign country is a good opportunity.

“You can get stuck in routines here,” said D’Alessandro. However, when she went to Thailand, “everyday was an adventure.”

During her time in Italy she said it was easy to make friends by staying in hostels because those people are “there for the same reason, to meet new people.”

Veronique Louissant said at first, she was hesitant to leave home but, “My life changed and my perspective changed.” Louissant said she traveled to London and Milan through study abroad programs and then decided move to Milan to teach English. She said she is “addicted” to traveling.

Stephen Cano who spent a semester in Hong Kong during his undergrad career then obtained his Master’s degree in France, said the attention he received in foreign countries was exciting because, “You’re sort of exotic.”

Cano said in France he got an apartment with French men because he did not want to live with other people from the U.S. Everyone’s lives change when going abroad. “Don’t expect everything to be the same when you come back,” said Cano.

He said more males should study abroad because typically more females do and everyone should experience it.

All four panelists gave similar pieces of advice to students studying abroad.  They advised students to simply do it.

“Unlock your phone and get data,” said D’Alessandro

Fortin said, “Save every single penny you can.”

Louissant said, “If it scares you … go for it.”

If you haven’t seen our fulldome film Habitat Earth yet, this is the perfect time! Spring is the season to get outside once again and appreciate the unique, interconnected ecosystem that you’re a part of. Habitat Earth will leave you with a deeper appreciation of these systems and the diverse life forms that populate them. Following the film, Betsey Brewer, Executive Director of education, conservation, and research programs at Southwick’s Zoo as well as Executive Director of Earth, Ltd., a non-profit center that works with local and global communities to promote environmental education, will present her unique perspective on the film’s messages.

Stop by and take advantage of your opportunity to learn more about Fidelity!

Open to all majors! Learn about Fidelity internships and job opportunities.

Come to this great networking event! Full-time and Internship positions available.  Over 55 employers from the business, human services, non-profit, and STEM will be featured. Bring your resume. Dress professionally. Log onto your RamTrack account to view full organizations list.
This project was made possible in part by the Institute of Museum and Library Services.

Meet hiring managers and have on-the-spot interviews for many career
opportunities at Santander!

The “Reverse Career Fair” is intended for EMPLOYERS to view course work from many majors/concentrations including graphic and web design seminar classes and computer science, marketing, management and business technology majors.

Come to the largest education fair in New England -  Over 100 school systems and agencies attend!  This annual recruiting event brings together teaching candidates and school systems across the country for networking and job opportunities in public /private schools.  Must register at: www.merccareerfair.com.

Employer Showcase Series: (See dates and times below)
9:00AM to 6:00PM every Wednesday in the McCarthy Center Lobby


Alumni Advisors
One-on-one conversations and drop ins with FSU alumni to get real advice on your career related questions  —
Most Tuesdays from 1 pm—4 pm in the CSER Interview Room, MC 514 beginning February 2017.

Hope-in-Action: Becoming an Active Bystander, Thursday 3/9, 4:30pm-6pm in the MC Alumni Room- Discussion led by Muslim Justice League. Sponsored by Professor Patricia Sanchez-Connally, Arts and Ideas and the Council on Diversity and Inclusion.