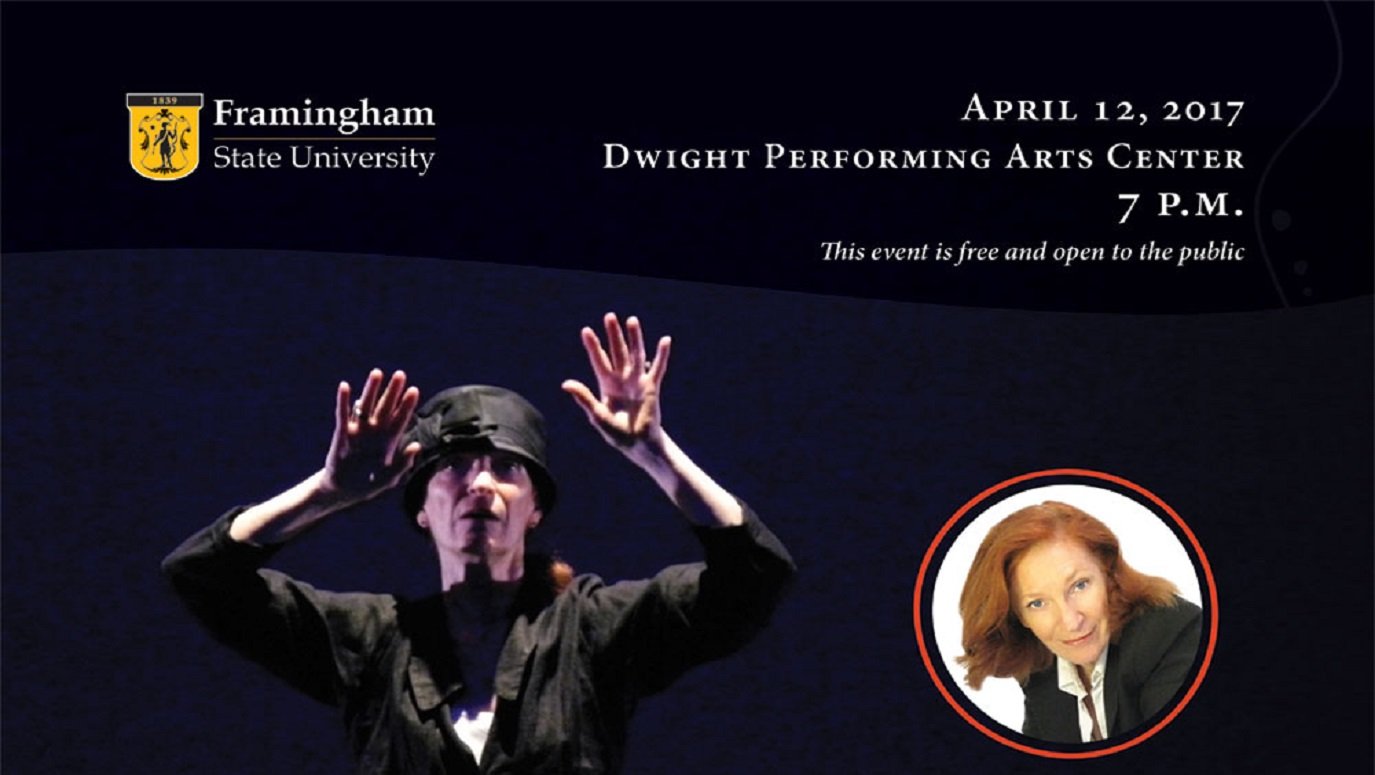 Georgia and Me – a one-woman play about Georgia O’Keeffe

Georgia O’Keeffe, the American painter who defied the male art world in the New York of the 20’s and 30’s, confronts Sarah in the midst of a spiritual crisis in dreams, challenging her to rekindle her creative fire! From a bistro in New York City, to New Mexico, to a showdown in the Texas Panhandle……….it’s never too late to find out who you thought you were.

Through posters, the major means of communication 100 years ago, Back to the Future, describes why, what, and how the US government launched a national campaign to conserve food and reduce waste to help win World War I. This national, decentralized organizing effort to reduce consumption of sugar, wheat, fats, and meat, and increase consumption of fish, oats, corn, potatoes, molasses, and home grown vegetables is strikingly similar to the current efforts to reduce food waste and eat healthfully.  The first poster recommended that Americans ‘buy local foods.’ The link between this campaign and the founding of the American Dietetic Association celebrates the 100th anniversary of our professional organization.

Three Perspectives on Food Conservation During World War I – Presentation, exhibition and reception

April 2017 marks the 100th anniversary of the United States entry into World War I.  In recognition of that milestone, this event brings together history, art and nutrition to reflect on that time period.

Mass media in was in its infancy in 1917 and the USFA utilized a variety of outreach efforts mostly relying on newspaper, magazine, and poster advertising directed to identifiable segments of the US population.  Immigrant groups, communities of color, businessmen, children, women’s magazines, restaurants owners, home and school gardeners were specifically targeted.

A home pledge card outreach effort elicited 14 million to join the campaign.  The program was informally called ‘Hooverism,’ as Herbert Hoover served as the USFA Director after returning from his self-appointed post in Europe where he organized the delivery of food to starving populations in Belgium and France.  This outreach effort was entirely voluntary and in the end, 33,841,307 pounds of food, equaling $5,234,028,208 was delivered to Europe during the war and reconstruction period.

Enjoy the closing Midday Performance event as we showcase the talents of Framingham State community members!

Globalization and Child Prostitution in Ghana

Join us for this important event sponsored by the Global Studies Program on Monday, April 10, 5 p.m. to 7 p.m., Alumni Room, McCarthy Center

Prostitution involving children is a complex global phenomenon with huge health implications. In this lecture, Dr. Georgina Yaa Oduro focuses on a case study to unearth some factors responsible for prostitution involving children aged between 14 and 17 in one metropolis in Ghana. The lecture explores the nature and drivers of child prostitution, background of children involved in the practice, their clientele and effects of the practice on the girls and the community.

Speaker Bio: Dr. Georgina Yaa Oduro holds a PhD in Sociology of Education from the University of Cambridge, UK. She is a Senior lecturer in Sociology at the University of Cape Coast, Ghana. She has research interest in gender and sexuality, youth and beauty cultures, reproductive health, gender-based violence, the social context of HIV/AIDS, and the health of African women.

Ani Gjika is an Albanian-American poet, literary translator, teacher, and author of Bread on Running Waters (2013). She is the recipient of a Robert Pinsky Global fellowship and an NEA grant for her translation of Luljeta Lleshanaku’s Negative Space, forthcoming from New Directions (January 2018). Gjika’s poems have been featured in fishousepoems.org, Plume, Seneca Review, Salamander, and elsewhere. Her translations have appeared or are forthcoming in Asymptote Journal, AGNI Online, Ploughshares, World Literature Today, Tupelo Quarterly, and elsewhere. She teaches at Massachusetts International Academy and Grub Street and is currently a judge for ALTA’s 2017 National Translation Award in Poetry.

Sponsored by the Department of English.

In Search of Vincent van Gogh: An Art Historian's Pilgrimage to the Netherlands and France

For an art historian, traveling to see famous artistic sites is a journey to the fount of knowledge. In the elusive quest to understand artist and oeuvre, Erika Schneider traveled to both famous and obscure locations associated with Vincent van Gogh while living in the Netherlands as a recipient of the inaugural Fulbright-Terra Foundation Award in the History of American Art.  This lecture will explore the secularized pilgrimage and the role it plays in research and teaching.

All are welcome to participate in our 7th annual “Book-themed” cake decorating contest.  All you need to do is bake a cake and decorate it to represent a scene or character from a favorite book, be it a beloved children’s book or your favorite adult book.  (Only one cake per person and no commercially decorated cakes allowed!)

The rules for the event are simple.  Register with Colleen Previte at cprevite@framingham.edu or x4648, if you wish to participate in the contest.  Bring in your “Book-themed” cake to the Henry Whittemore Library by 9 a.m., Thursday, April 13th.  Please have your cake properly covered with clear plastic wrap.  This will be taken off when the judging commences.  Please do not put your name on your cake; you will be assigned a number for your cake submission.

We are allowing anyone coming through the library to judge the cakes, and they will put a token in the box of the cake they find to be the best.  There will be bragging rights, a photo in our library blog, and ribbons for 1st-3rd place as well as notices for honorable mentions.

Judging will run from 9 a.m. to noon.  Winners will be announced at 12:30pm or via phone/e-mail.  At that time we will cut into these delicious creations and offer them to patrons, unless told otherwise.

We hope you will consider participating in our Seventh Annual Literary Cake Decorating Contest!
Thanks

A day before the national March for Science takes place across the country, Framingham State University will host Family Science Day, a series of interactive science presentations and exhibits on campus.

Highlights of the festival include hands-on experiences in biology, chemistry, physics, food science, robotics, and engineering, as well as stunning HD planetarium programs throughout the afternoon. Most presentations will be setup outside in the O'Connor Hall parking lot, weather permitting.

“Family Science Day is a great event for anyone with an interest in science, no matter your age,” says Dr. Irene Porro, Director of the McAuliffe Center. “We hope the community will come out and take advantage of this free program.”

This is the third year in a row the University is hosting a special science festival for members of the local community. Each of the past two years, the event has been held on a Saturday, but this year’s festival was moved to Friday to avoid a scheduling conflict with the national March for Science.

For announcements and updates regarding the festival, visit www.christa.org/science-festival. You may also e-mail cmc@framingham.edu with any questions.

Come support your fellow student writers and hear them read their prize-winning works! Free and open to the public! Friends and family are encouraged to participate.

The Marjorie Sparrow Award for Poetry

The Howard Hirt Literary Awards for Fiction and Creative Nonfitction

Sponsored by the English Department.

The World in Flicks: Mustang

Nominated for 2015 Academy Award for Foreign Language Film.  It's the beginning of the summer. In a village in the north of Turkey, Lale and her four sisters come home from school, innocently playing with boys. The supposed debauchery of their games causes a scandal with unintended consequences. The family home slowly turns into a prison, classes on housework and cooking replace school, and marriages begin to be arranged. The five sisters, driven by the same desire for freedom, fight back against the limits imposed on them.

Faculty, Students and guests will have the opportunity to play fun games, while enjoying music on North Hall Lawn. Food and drinks will be provided as well.

Wednesday, 4/12, 4:30-6:30 p.m., CIE: The Mask You Live In documentary showing with food
**This is a time and location change from a previously scheduled showing of the film.

Brave Space Series: LGBT+ 101 Workshop Wednesday
4/12, 1:30pm-2:20pm, Center for Inclusive Excellence
Discussion led by Jace Williams and Mattie Bennet. Still not sure on some LGBT+ definitions? Want answers to any questions you have about the LGBT+ community? Come on down and learn the 101 of the LGBT+ community! Sponsored by CIE.

Movie Screening: Mask You Live In
Thursday, April 12, 4:30, Center for Inclusive Excellence
Wellness Education and the Center for Inclusive Excellence will be hosting a screening of the documentary Mask You Live In. This documentary and discussion explores masculinity and the ways that narrow definitions of masculinity affect boys, men, and society at large.

Come to the largest education fair in New England -  Over 100 school systems and agencies attend!  This annual recruiting event brings together teaching candidates and school systems across the country for networking and job opportunities in public /private schools.  Must register at: www.merccareerfair.com.

Employer Showcase Series: (See dates and times below)
9:00AM to 6:00PM every Wednesday in the McCarthy Center Lobby

-Dr. Rachel Trousdale’s article, “Salman Rushdie and Islamophobia,” was just published online by The Journal of Commonwealth Literature.  It is scheduled to appear in hard copy as part of a special issue on Rushdie.