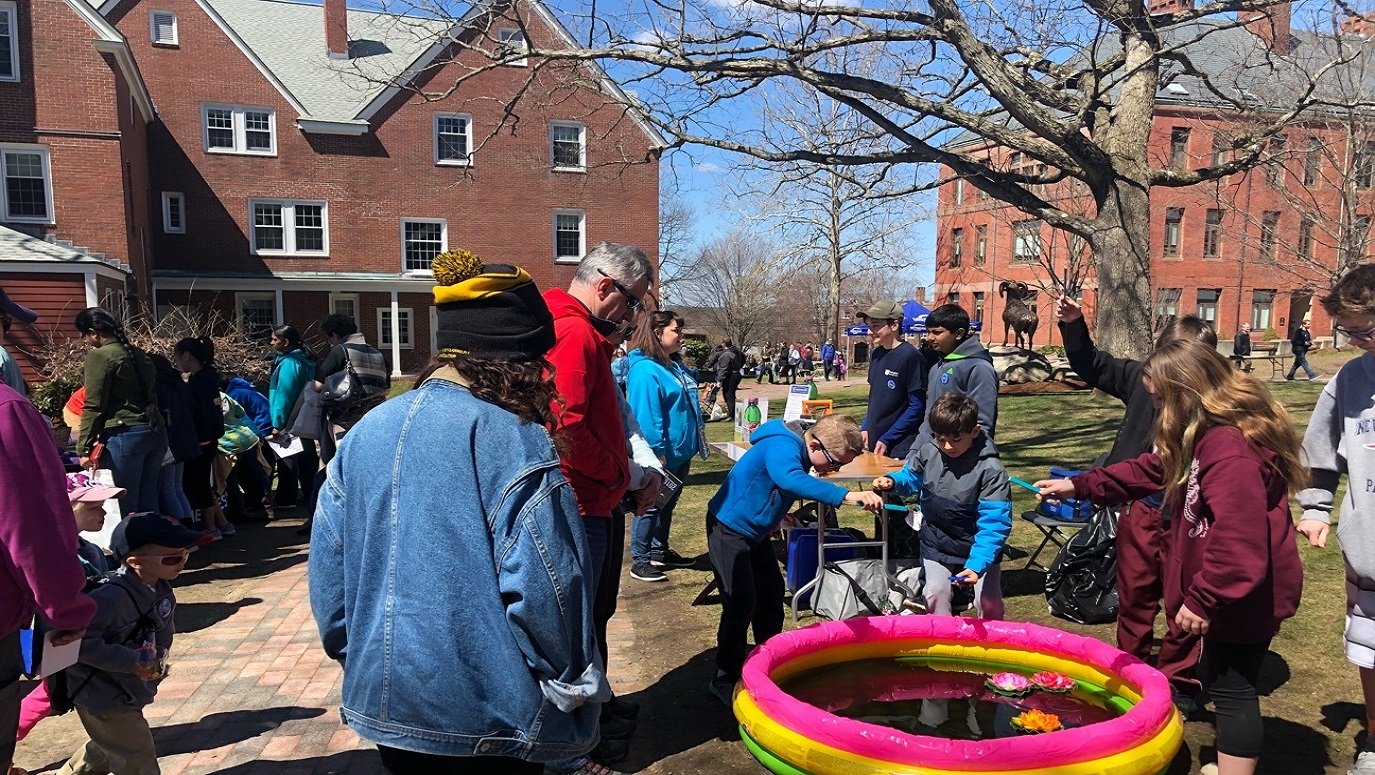 Community Comes out for Science on State Street

Senior Chemistry major Alex Hiller instructs a group of children on what is inside a battery and how to reconstruct one, at one of the dozens of interactive science experiments setup throughout Crocker Grove.

“First, we have to destroy one,” he said to the eager group as he showed a previously cut up battery which contained wet black solution which consisted of zinc and manganese oxide.

To rebuild the battery, Hiller gestured to a metal bucket, which contained a clay pot filled with salt water. Upon charging the metal bucket, Hiller was able to create the same amount of energy as the destroyed battery.

“Science on State Street is a great way to share my love for science. Why else would I be a science major if I couldn’t share it with others?” he said.

More than 1,000 members of the community attended the 4th Annual Science on State Street, organized by the FSU McAuliffe Center, in partnership with the MetroWest STEM Education Network.

Those in attendance were invited to explore stations run by members of FSU’s STEM programs and clubs, as well as outside community organizations.

Physics and Earth Science Professor Vandana Singh said Science on State Street “is about making concepts simple … games help communicate the message to children. The more knowledge you have about the universe you live in, the more you enjoy it.”

Students from an Organic Chemistry class were able to have a firework presentation in the labs where they showed the process of making the gunpowder used for fireworks.

The Food Science Club made gluten and gluten-free dough to demonstrate the difference, but then had cookies made from both types of dough to show their taste is the same.

Senior Ben Montemurro said a child with Celiac Disease came by during the day and was excited to see other kids his age learn that gluten-free actually tastes good.

“It’s an opportunity to teach kids about gluten versus gluten-free. Plus playing with dough is fun,” he said.

The Framingham Compost Crew had a table to show people how to compost and its importance.

Representative Brigitte Griffin showed off the warm compost bin. People would put their food waste (no meat allowed) into a bin with worms and dirt. The worms would then eat the remains and the end result would be a rich soil - perfect for gardening.

“We have to inform people in a fun way. We are running out of time here on this planet,” said Griffin.

In addition to the outdoor activities, a keynote address titled, Exploring Mars’ Past, by Dr. John Grant from the Smithsonian National Air and Space Museum, took place in DPAC. The Christa McAuliffe Center also had planetarium shows, which took place every half hour.

Throughout the spring semester, The Food and Nutrition Department’s Nutrition Club has been working with the Bridle Path Apartments in Randolph, MA to develop a cookbook with recipes from the community through a nutrition promotion grant they received from Harvard Pilgrim HealthCare Foundation for Eating Well at Every Age.  Students in The Nutrition Club completed nutrient analyses on the recipes and recommended nutrition tips to improve the nutrition quality of the recipes.  Students provided a cooking demonstration at the Cookbook launch party on April 23, 2018 to teach residents how to prepare meals with seasonal vegetables.

The Student Poster & Presentation Day is a celebration of student scholarly work and faculty support. There will be two opportunities for students to present at the next event: Thursday, May 3, 2018 from noon to 6 p.m. and Friday, May 4, 2018, from 10 a.m. to 4 p.m.

More Recognition for The Gatepost

The Following was submitted by Professor Desmond McCarthy:

The Gatepost won three Mark of Excellence Awards from the Society of Professional Journalists on April 21st at the organization’s “Region 1” conference, hosted by Temple University in Philadelphia. The Mark of Excellence Awards honor the best of collegiate journalism. Region 1 is comprised of the New England and mid-Atlantic states, and the awards recognized material published during the 2017 calendar year. The Society of Professional Journalists, founded in 1909, is the “nation’s most broad-based journalism organization, dedicated to encouraging the free practice of journalism and stimulating high standards of ethical behavior.”

Gatepost Arts & Features Editor Andrew Willoughby, a senior English major with a Concentration in Journalism, was one of two regional finalists in General Column Writing for his regularly featured column, “Musical Musings.”

Gatepost Staff Photographer Oscairy Tavarez, a sophomore Spanish major, was a finalist for Sports Photography for “Rams Strike a Pose,” the feature photo that appeared on the front page of the September 15, 20217 edition of The Gatepost.

As the winner of the General Column Writing contest for Region 1, Lizzy Stocks’ work will be entered into a national contest with the award winners from other regions around the country. A panel of judges will announce the results of that competition in May. Here are links to the press release announcing the awards and the work of our award-winning students:

Please join me in congratulating Lizzy, Andrew, and Oscairy!

Jay Ash serves as the Secretary of Housing and Economic Development for the Commonwealth of Massachusetts. Secretary Ash is responsible for directing and executing Governor Charlie Baker’s agenda on housing and community development, job creation, business development, consumer affairs, and business regulation. Secretary Ash previously served as the city manager in his native Chelsea, a position he held from 2000 to 2014.

A Day in May

The Center for Excellence in Learning, Teaching, Scholarship and Service (CELTSS) Presents:

Faculty who receive CELTSS funding share their research at A Day in May.  The keynote speaker will be Paula M. Krebs, who is Executive Director of the Modern Language Association, a professional association with over 24,000 members in 100 countries. Her keynote presentation "Why the Humanities? Careers, Community, and Critical Consciousness," will take place after lunch. Krebs previously served as the Dean of the College of Humanities and Social Sciences at Bridgewater State University; a special assistant to the president for external relations at Wheaton College; American Council on Education Fellow in the president’s office of the University of Massachusetts; and professor of English and department chair at Wheaton. Her work focuses on the value of studying the humanities, interdisciplinary collaboration, and partnerships between the campus and the community.

Come relax with therapy dogs, massage, and other stress relieving activities prior to finals.

Employers showcase their organization every Wednesday in the McCarthy Center lobby by the Welcome Desk. Their goal is to network with FSU students and recruit students for full time or internship opportunities. Stop by their table in order to learn about new internships and job opportunities!

9 a.m. to noon: Ashland Public Schools and Piece by Piece Moving and Storage

This special breakfast celebrates our 2018 Employer Partners of the Year: The MathWorks, The Paper Store, and the MetroWest YMCA. The CSER Office recognizes the coaching/mentoring these businesses provide and their employing our students and alumni.
COMING THIS FALL 2018:

SAVE THE DATE: Employment & Engagement Day Fair
Monday, September 17, 2018, 11:30 a.m.— 2:20 p.m., Athletic Center
Great opportunity to find an off-campus job with one of our many local retailers and restaurants or non-profits. This event is also a fantastic opportunity to learn more about clubs, community service, and getting involved both on and off campus. Representatives from 100 local businesses will be looking for YOU!

SAVE THE DATE:  Career Advice Roundtables (CARS) Networking Event
Wednesday, September 26, 2018, 3:30 p.m.— 5:30 p.m., MC Forum
The CARS Program is designed to provide a dialog between professionals (including many FSU alumni) and students seeking real answers to their career related questions. Each employer will moderate one table as students rotate from table to table seeking advice from participating professionals.

SAVE THE DATE:  The 13th Annual Major/Minor Fair
Tuesday, October 23, 2018, 11:30 a.m.— 1:30 p.m., MC Forum
Having difficulty choosing a major or a minor? Learn more about which careers would correlate to your choice. Visit academic tables, Career Services, and International Education (Study Abroad). Ask questions about classes and skills needed for the major/minor you are considering, and how graduate school and internships play a role.

How to Hold a Dead Star in Your Hands

Astronomy is a bit different from other sciences. Scientists in most other fields can take their subjects into labs and study them up close. But because objects in space are very far away, it is usually impossible for astronomers to get their hands on them. But now, thanks to data from some of our favorite observatories, anyone can hold a dead star in their hand…and even, walk (virtually) among the remains of a star that exploded a long time ago. Join us in the planetarium for a live, multimedia presentation with Kimberly Kowal Arcand, who will show us how light and information can travel millions of miles across the universe, and end up in the palm of our hands.

Kimberly Kowal Arcand is the Visualization Lead for NASA’s Chandra X-ray Observatory, which has its headquarters at the Smithsonian Astrophysical Observatory in Cambridge, Massachusetts. Kim describes herself as a science data “story teller,” who transforms data into meaning through a variety of media, including 3D visualizations, exhibits and experiences, non-fiction books and more.