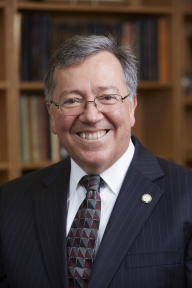 Dr. Cevallos was born in Cuenca, Ecuador and his family moved to Puerto Rico when he was 14. Dr. Cevallos earned his bachelor’s degree in 1976 at the University of Puerto Rico at Mayagüez. From Puerto Rico, he moved to Illinois where he earned his master’s and doctoral degrees in 1978 and 1981, respectively, from the University of Illinois at Urbana-Champaign.  His area of research is Latin American literature, with particular emphasis in the Colonial era.

He began his career in education in 1981 as an assistant professor of Spanish at the University of Maine at Orono.  In 1984, he moved to the University of Massachusetts at Amherst, where he was promoted to associate professor in 1988 and to full professor in 1992.  In 1994, he was asked to serve as faculty advisor to the provost. In 1996 he was selected as a Fellow by the American Council on Education (ACE) and spent his fellowship at Wesleyan University, in Middletown, Connecticut.

Upon his return to UMass, Cevallos became chair of the Department of Spanish and Portuguese. Soon after, he was appointed Vice Chancellor for Student Affairs, a post he held until 2002, when he became President of Kutztown University in Pennsylvania for many years, until beginning his tenure as President of Framingham State University.

Dr. Cevallos is an advocate for bringing a global perspective to Framingham State University.  As a faculty member in Massachusetts, he directed the Summer Program in Salamanca, Spain, and has been involved with international programs since then.  At FSU he has been involved in creating partnerships with universities in Ecuador, Costa Rica, and Brazil.

Dr. Cevallos and his wife, Josée Vachon-Cevallos, believe in community involvement and have volunteered to serve in numerous non-profit boards in the region. Currently Dr. Cevallos serves on the boards of AASCU, NCAA Division III President's Council, the United Way of Tri-County, Jewish Family Service, and the MetroWest Chamber of Commerce. He is also a member of the Framingham Rotary Club. Josée is an Overseer at the Danforth Museum Board of Overseers, and serves on the board of the Franco American Center in Manchester, NH.