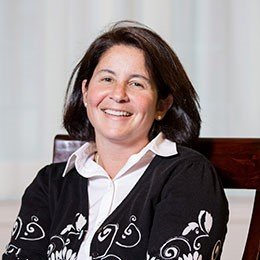 The College of Education at Framingham State University is pleased to recognize Professor Susan Donnellan for the 2019 Educator Alumni of the Year Award. Susan earned her undergraduate and graduate degrees from Framingham State University. She received her BS degree in Psychology with a coordinate major in Early Childhood Education and her MEd degree in Special Education. Currently, Professor Donnellan is a doctoral candidate at Northeastern University and concentrating in curriculum, teaching, learning, and leadership.

In her early career, Susan worked as a special education assistant for Newton Public Schools, where she implemented differentiated instruction for students in an inclusive educational setting. Ms. Donnellan also worked as a kindergarten teacher at Mount Alvernia Academy in Chestnut Hill, MA, where she developed engaging and creative curriculum to meet the academic, behavioral, social, and emotional needs of young children. Since 1995, she has served families and children in Massachusetts as an educational specialist. In this role, Susan offers support and guidance to families of children with special needs.

In 2012, Professor Donnellan began a career in higher education at Mount Ida College as an assistant professor of education. In this position, Susan developed and coordinated partnerships with local school districts, served as a college supervisor for Mount Ida teacher candidates, participated on the College’s Curriculum Committee, and taught courses in the early childhood program. Currently, Susan is a temporary assistant professor of education at her alma mater, Framingham State University. This fall, Susan will return to Framingham State University as an assistant professor of early childhood education. She is a valued colleague in the Education Department, and works tirelessly to ensure Framingham State teacher candidates are prepared for the joys and challenges of being a teacher is the 21st century.

Professor Donnellan is an active member of her community by serving on two local advisory boards - Newton North High School Early Education and Care Advisory Board in Newton, MA, and the Bright Horizons Family Solutions Advisory Board in Watertown, MA. Susan is committed to her service work, and enjoys helping to support children and families in early education and care settings.

It is an honor to present Susan Donnellan for the 2019 Educator Alumni of the Year Award from Framingham State University. Professor Donnellan has served the teaching profession well over the last twenty-four years, and we are proud to salute her for many years of outstanding service.

The College of Education at Framingham State University is pleased to recognize Dr. Patricia Kelley as a recipient of the Educator Alumni of the Year Award for 2018. Dr. Kelley completed her undergraduate work at Worcester State University where she majored in elementary education. Pattie was an elementary classroom teacher at the Woodland School in Milford for nine years when she decided to enroll in the Literacy and Language master’s degree program at Framingham State University. The intense literacy courses were exciting and motivational to Pattie, and her new expertise and enthusiasm enabled her to apply for the reading specialist position at the Stacy Middle School – also in Milford. In 2007, the administration recognized Pattie’s strengths and appointed her to the position of Curriculum Supervisor for Reading, Language Arts, and Social Studies, PreK-12, a position she held for five years. Due to budget constraints, the Curriculum Supervisor position was eliminated, and Pattie decided to return to the classroom as a fifth-grade language arts teacher at the Stacy Middle School. In 2010, Pattie accepted the position of Title I Director, and in 2016 she added Curriculum Team Leader Coordinator position to her responsibilities. Currently Pattie continues to serve as Title I Director, Curriculum Team Leader Coordinator and Reading Specialist.
Pattie Kelley is active in professional literacy organizations and served as president of the Nobscot Reading Council. She continues to serve on the executive board of Nobscot, as well as co-chairing the Exemplary Reading Committee for the Massachusetts Reading Association. She also shares her professional expertise by presenting at local and state level conferences.
Dr. Kelley thoroughly enjoys learning – especially about literacy and literacy instruction. Thus, she entered the doctoral program at Northeastern University and received the Doctor of Education in Curriculum Leadership degree in May of 2016. Her dissertation, titled “Response to Intervention in the Middle School and its Effect on Students Accessing Literacy Skills in the Tier 1 Classroom,” greatly affects her work in the Milford Public Schools.
Framingham State, and especially her master’s degree advisor, Dr. Diane Lowe, are extremely proud of the leadership Pattie provides in her school district, in her work with various professional literacy organizations, and to anyone interested in literacy. 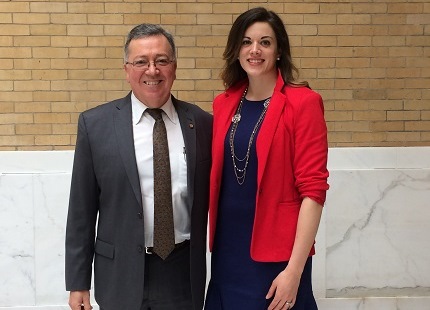 Kristen (Baranofsky) Gray graduated Summa cum Laude from Framingham State University in May 2009 with a B.A. in developmental psychology, and educator licensure in Early Childhood Education, PreK-2. During her undergraduate program, Kristen was a member of two Education Department honor societies, Kappa Delta Pi and Alpha Upsilon Alpha (literacy). After graduation, Kristen taught kindergarten and first grades at the Bridge Elementary School in Lexington, MA from 2009-2016. During that time she obtained her M.Ed. in Language and Literacy in December 2012, and was licensed as a Reading Specialist in 2014. In 2016, Kristen earned a second M. Ed. with an Administrator’s license in Elementary Education Leadership from Endicott College. Since the summer of 2016 she has been serving as Assistant Principal of the Bridge Elementary School. She has served as a trainer in several district and school-wide technology based trainings, and has worked with Positive Behavior Interventions and Supports programs, including specific work to enhance Tier 1 social emotional learning curriculum and school-wide focus on respect and perseverance.

During Kristen’s time as a teacher and administrator in the Lexington Public Schools, she started the student mentor program, which serves over 40 students with sustainable, one-on-one student-teacher relationships. She also served as a mentor to new teachers in her building, and participated in the ELA curriculum and Next Generation Science Standards curriculum review committees. In May 2014 Kristen co-presented with Megan Hinton (grade 1 teacher) and Laura Broach (literacy specialist) at the Massachusetts Reading Association Conference, “Meeting the Standards with Social Studies and Literacy Projects. In September 2013, she was published in the MRA primer, Bringing More Social Studies Content into the Kindergarten Literacy Curriculum, with co-author Laura Broach. In April 2013, Kristen presented at International Reading Association annual conference with Laura Broach and Michelle Koopman, Putting Literacy on the Map with Social Studies Content in Grades K to 3.

Since her days at Framingham State University, Kristen has been committed in her profession to continue to develop and grow as a teacher, leader, and lifelong learner. 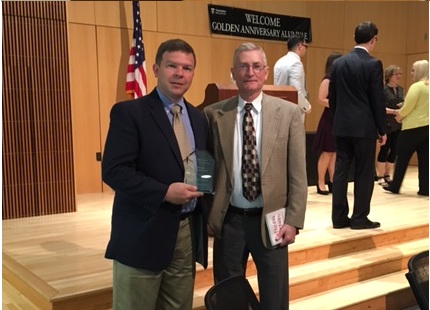 Zachary Galvin graduated from University of Massachusetts Amherst in 1993, receiving a Bachelor of Arts in Acting and Technical Theatre.  After spending two years touring the United States with Landis and Company Theatre of Magic, Zach decided to bring his considerable talents to the classroom.  He entered the Post-Baccalaureate Teacher License program at Framingham State University to become an English teacher.  After his successful student teaching experience at Natick High School, Zach was hired as an English teacher there in 1996.

Unfortunately, Zach entered his classroom and cancer treatment simultaneously.  Amazingly, he missed only two days of school that year, and managed to contribute his theatrical expertise to the high school musical. In 2003, Zach was named a finalist for Massachusetts Teacher of the Year.

Now cancer-free, Zach has become a tireless fundraiser and advocate for those with cancer.  He organized Zach’s Pack, a Jimmy Fund Marathon Walk team, raising almost $600,000 to date. Each year on February 26, Zach celebrates “Yahoo Day,” inviting his friends, family, and acquaintances to participate in random acts of kindness, large or small, to honor those inside and outside of the medical community who helped him to survive cancer.

Now a vice-principal at Natick High School, Zach is known as a tough but fair administrator whose door is always open to students and staff alike. A few years ago, Zach took on the herculean task of steering Natick High School through the building of the new state-of-the-art high school.  Zach was the go-to person for all constituencies affected by the incredibly complex process of building a new Natick High School, closing the old Natick High School, and opening the new school. No issue was too insignificant for Zach to address.

During his tenure at Natick High School, Zach has brought his talents to the drama program and to the ice rink as a member of the girls’ hockey team coaching staff. He has also travelled to China several times to recruit students to study at Natick High. He has been an active member of the Education Association of Natick, serving as a negotiator and representative, the Mass Teachers Association as a representative, and the National Education Association, as a state-wide director representing administrators from Massachusetts.

Every day, Zach continues to inspire others through his work at Natick High School and in his humanitarian endeavors. 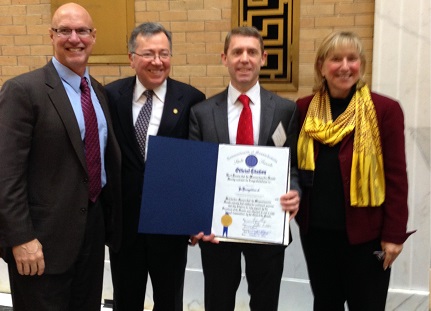 On November 18, 2014, FSU alumnus Greg Lagan was honored, along with alumni of the other Massachusetts state universities, with the Outstanding Educator Award. Mr. Lagan completed FSU’s Post Baccalaureate Teacher Licensure (PBTL) program, then known as PBTC, in 1992. After teaching in Colombia, Mr. Lagan taught at Framingham High School in the bi-lingual program as well as the history department and served as department head until assuming the role of vice principal in September 2014.

Throughout his time as a history teacher and department head, Greg supported FSU teacher preparation programs in the following ways: 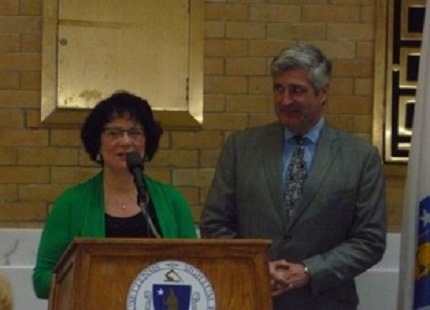 On December 18, 2013 Helen Higgins was chosen by her alma mater, Framingham State
University, to receive an Outstanding Educator Award at the State House in
Boston in recognition of her work in education. Seven other teachers who
graduated from the state university system’s teacher preparation programs also
were given the award. Helen Higgins has taught for thirty-seven years in the
Framingham Public School system, including at the former Lincoln
Elementary, Woodrow Wilson, and Dunning Schools. Most of her experience
has been in grade two. As a supervising practitioner, she has worked closely
with Framingham State University's field study and practicum students.