On July 3, 1839, three young women braved a fierce thunderstorm to enroll in a new school of higher education in Lexington, Massachusetts. This school, the first state-supported school dedicated to training teachers in America, would one day become Framingham State University. 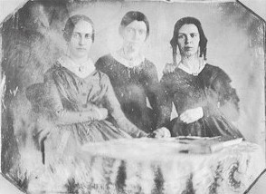 The Normal School, as it was known, came about due to the chronic need in an expanding United States for professional-quality teachers. While young people of the upper social strata could receive quality educations at private academies and universities, students who came from the middle and working classes and who attended free public schools received little or no education. Poorly trained teachers, incapable of properly educating students, could not teach the principles that would produce knowledgeable and valuable citizens in the young Republic. Throughout the 1820s and 1830s, campaigns for normal schools to train teachers became more and more part of the political dialogue. Frequently cited in the argument for these schools were examples of established, successful normal schools in Europe.

Finally, in 1837 the Massachusetts Legislature passed a bill that established the State Board of Education. The Board’s first Secretary was Horace Mann, an enthusiastic advocate for establishing the normal schools. Edmund Dwight, a wealthy philanthropist from Boston, gave the fledgling schools ten thousand dollars, matched by the Legislature, for equipment and instructional expenses. In 1838, three normal schools were legally established in Massachusetts on a three-year experimental basis, and in 1839 the first of these opened in Lexington (now FSU). While the other two normal schools that opened later in 1839 and 1840 – Barre (now Westfield State University) and Bridgewater (Bridgewater State University) – accepted male and female students, the Normal School at Lexington set another precedent by being the first public women-only teachers college.

The Normal School began in a building that still stands today on the northeast corner of Lexington Common. The Reverend Cyrus Peirce, a Unitarian minister and hard-working educator, was the first Principal at Lexington. It was his enlightened leadership that established the mission of the Normal School. As part of the curriculum he set up, a model school was created as a practicum for the future teachers. In 1840, the first class of twenty-five women graduated from the Normal School. Two of these graduates included Mary Swift Lamson, a teacher in the newly-conceived education of the blind and deaf (Perkins School for the blind), as well as a co-founder of the YWCA in Boston, and Rebecca Pennell Dean, who in 1853 at Antioch College became the first female college professor in the United States.

In 1843, Mary Elizabeth Miles became the first African-American student to graduate from the Normal School at Lexington. She was also the first African-American graduate of any public teachers college in America. After graduating, she went on to teach in Ohio, New York State, and Boston. An ardent abolitionist, Mary Miles dedicated most of her life to the movement, working with her husband, Henry Bibb, an escaped slave and abolitionist. By 1845, despite some opposition and financial struggles, all three of the Normal Schools had survived and flourished.

The Massachusetts Legislature designated them as State Normal Schools, ensuring their future. What had begun as an experiment had become a great success.  In 1850, to certify a standard of professionalism for its graduates, the School’s first printed diplomas were issued.

The Normal School outgrew its facilities twice, moving first to West Newton in 1844 and finally in 1853 to its permanent location in Framingham. A suitable location of five and three-quarter acres on scenic Bare Hill in Framingham Centre was offered by the Town. With appropriations from Framingham, the Boston and Albany Railroad, and the Massachusetts Legislature, a new school building, designed by a local architect named Alexander Esty, was constructed.

The building was dedicated and opened on December 15, 1853. The School’s motto “Live to the Truth,” was inscribed in black and gold lettering on the new building. This motto was derived from Cyrus Peirce’s standard statement upon closing his lessons at the end of each day. The Normal School became a model for the education of excellent teachers to meet the demand of common schools in Massachusetts, the United States, and throughout the world 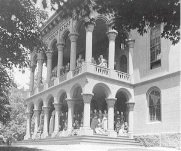 School alumnae traveled to the American South and West to teach at institutions for groups who generally had not attended public schools and colleges before, including African-Americans and Native Americans. Some went overseas as missionaries. Some helped found normal schools in the United States and other lands. One such alumna was Olivia Davidson, class of 1881. She co-founded, with her future husband Booker T. Washington, the Tuskegee Institute (now Tuskegee University) in Alabama.

From 1848 to 1898, the Normal School conducted an advanced program for students who aspired to careers in high school and college teaching, school administration, law and medicine. This program opened unprecedented educational and career opportunities for women. In addition to teachers, there were principals, professors, doctors, lawyers, poets and writers among these nineteenth century graduates. There were also Normal School women who participated in the suffrage and temperance movements, and in all of the significant educational and social reforms of the time. In 1866, Annie Johnson was appointed Principal, the first woman to serve as head of a Massachusetts Normal School. Ellen Hyde, class of 1862, succeeded her as Principal in 1875 and served until 1898, becoming the only graduate of Framingham Normal School to also be its chief administrator. Under both these women, the School expanded its academic programs. The School also began and nurtured associations with other public education institutions.

During the late Nineteenth Century, with increased demand for educational and residential space, the Normal School outgrew its original lone building. In 1869, Normal Hall was built as the first on-campus residence for students, administrators and faculty. It burned in 1914 and was eventually replaced by Horace Mann Hall in 1917.

In 1886, Crocker Hall opened. Crocker Hall was named for Lucretia Crocker, class of 1850, who was the first woman supervisor of the Boston Public Schools from 1876-1886. It was originally constructed as a residence; however, it eventually held classes too. Crocker was extensively rebuilt after being damaged by several fires and the Hurricane of 1938. Today it is the oldest building on campus and houses faculty offices. In 2015 it has undergone extensive renovations.

In 1889, May Hall was built and named after Abby Williams May, a distant cousin of author Louisa May Alcott. Abby May, a leader among Boston’s social reformers, was the first woman to be named an Official Visitor to the Framingham Normal School by the Massachusetts Board of Education. May Hall replaced the original Normal School Administration Building, which was razed. May Hall provided additional classroom and laboratory space, faculty offices, a small gymnasium and a lunch room for commuter students. It was later damaged by the Hurricane of 1938 and has been renovated several times since its construction. Today it houses the liberal arts departments’ offices and classes. Its image is also featured on the seal of the Town of Framingham. 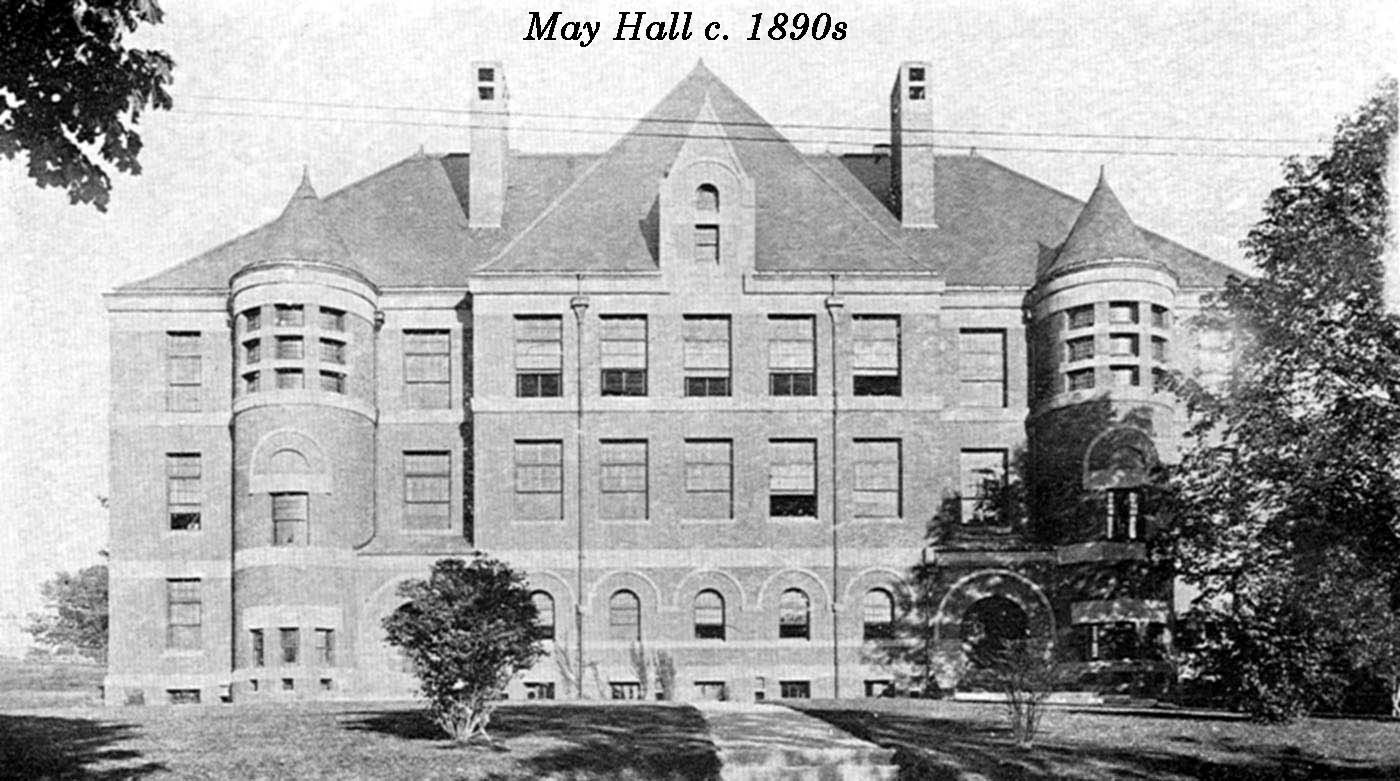 In 1898, a new program was instituted at the Normal School when the Boston School of Cookery moved to Framingham and became the Mary Hemenway Department of Household Arts. This department provided a unique distinction for the School and diversified its mission as a teacher training institution. Distinguished alumnae of this pioneering program laid the foundation for studies in consumer sciences, including nutrition and food, dietetics, and clothing and textiles.

During the first half of the Twentieth Century, the number of students steadily increased, necessitating campus development and expansion. In 1902, Wells Hall was constructed, which provided a gymnasium, and a new classroom and lab space. This building was named after Kate Gannett Wells, the successor of Abby May as Official Visitor to the Normal School.